Making Changes Association provides programs, services and resources to empower women and girls as they work to advance their futures. Our goal is to help Calgary women build the confidence and skills to participate more fully in the community, both socially and financially.

A Story from the Walk-In Closet

In honour of June Dresses, we’d like to share a client story that celebrates empowering women through dress.

Our Walk-In Closet program provides women facing financial barriers with clothing, shoes, and accessories to help them look and feel their best as they transition into a new career, volunteer or education opportunities.

Jessie was born and raised in the coastal province of Shandong in the People’s Republic of China. She attended The School of Textile and Design at Beijing Institute of Clothing Technology and achieved a Bachelor of Arts Degree.

There were many factors that weighed in on Jessie’s decision to immigrate. While heavy traffic and thick pollution concerns were prominent, it was working ten-hour days that left Jessie no time for herself that finalized her decision.

She arrived all on her own in Calgary in 2010. The first agency she encountered for help was Calgary Catholic Immigration Society (CCIS), where she began taking English classes. She soon found a job in sales, met her husband, and started a family which took up most of her time. 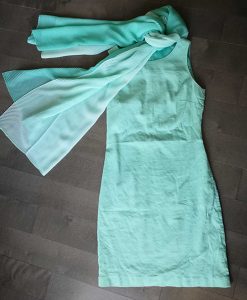 In 2014 Jessie decided to once again pursue a career, so she began attending the Employment and Life Skills Program offered at Making Changes Association. This program not only allowed her to improve her English but gave her the knowledge and confidence to find her career path. While attending this program she became pregnant with her second child, and so once again her career plans were put on hold.

In February 2018, Jessie enrolled in the five-month Medical Office Assistant program at East West College of Business and Technology.

As her practicum approached, she was referred to the Walk-In Closet for clothing. After staying at home raising her children for so many years, as well as being used to the casual style clothing that she wore in China, Jessie did not have an adequate wardrobe to enter the workforce in Calgary.

Help from an Image Consultant

At the Walk-In Closet, while comfort and fit are important, teaching style and shifting negative body images often play a big role during the 90-minute appointment. Jessie came to her appointment feeling dejected after years struggling to find clothes to fit her petite frame, as well as stuck in her, go-to clothing style of shapeless grey and black – her “mommy clothing.”

Her image consultant encouraged her to try bright colours and fitted dresses, pants, and skirts. While initially very reluctant, she decided to give them a try. In Jessie’s words, “I walked in feeling like a caterpillar and left as a butterfly.”

Jessie continues to be overjoyed at her transformation. She was able to wear the clothing during her practicum as well as confidently attending the three interviews that followed.

Jessie believes that this service is important because as a new immigrant she did not know where to begin when she realized that her style did not fit in with her new country.  She said that without help it is very difficult to adapt. She found this help at the Walk-In Closet.

She is still actively searching for a job and is considering taking more classes to improve her English. She has bright hopes for her future and will remain ever grateful for the help that she has received.

For more information on all of our programs and services, please visit our website: makingchangesassociation.ca

Making Changes Association provides programs, services and resources to empower women and girls as they work to advance their futures. Our goal is to help Calgary women build the confidence and skills to participate more fully in the community, both socially and financially.